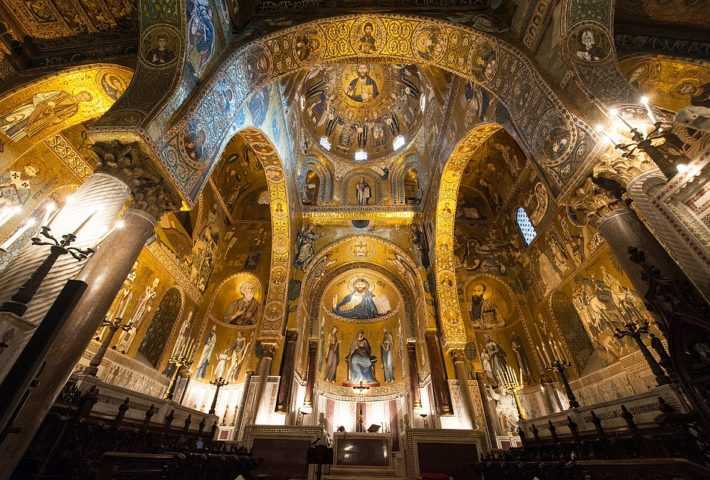 Located on the first floor of the Norman Palace, now the seat of the Sicilian parliament institutional, the palace chapel was built by King Roger II in 1130, consecrated in 1140 as a private chapel of the royal family and compleatata in 1143. That same year during his inauguration, at the time of the homily the arcivescono Taormina Philagathus by Cerami pronuciò: << […] The roof can hardly satisfy to watch it, and we wonder to see it and hear about it, being adorned with some fine carvings variously processed in the form of small baskets, and rifulgendo golden on all sides mimics the sky when the air serene shines for the choir of the stars […] >>

the Palatine Chapel is dedicated, at the behest of King Roger II in St. Peter the Apostle, and today is considered one of the greatest examples of historical and artistic coexistence between cultures and religions. For its implementation, in fact, they were involved Byzantine workers, Latin and Arab, who have managed to bring together the different styles in a harmonious and unique.

The Palatine Chapel is divided into three naves separated by columns of granite and marble supporting a structure of pointed arches. The dome erected over the three apses of the church together with the transept and apses same is entirely decorated with Byzantine mosaics. The best known is the Christ Pantocratone that blesses all who visit the chapel. Unlike the dome, the ceiling of the nave and two aisles is made of wood and decorated with carvings and paintings of Arabic style called Maqarnas following the representation of paradise as it is described in the Koran.