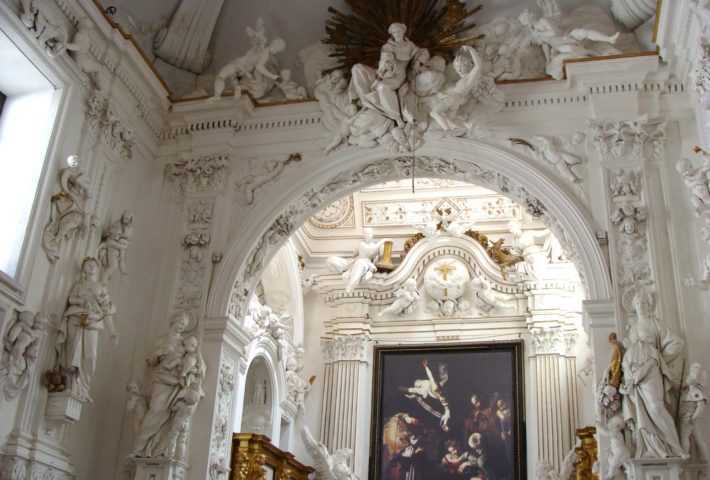 In Palermo there are different Oratories all built between the end of 1500 and 1700. With the oratory term, at that time, it indicated the home and institutional Archittettonica of a company or an association of secular obeyed a cult and which he governed relations with the convents.

The Oratory of San Lorenzo is one of them. Built around 1570 by the Society of St. Francis of Assisi on the remains of an ancient church dedicated to San Lorenzo. The task of the brothers of the Society was to bury the poor of the Kalsa (Palermo neighborhood) and to spread the cult of San Lorenzo and San Francesco.

In 1609 during his stay in Sicily, shortly before his death, the painter Michelangelo Merisi, known as Caravaggio, he left in the island some of his works; among them the one that  is todayone of the  the most famous, specially conceived for the altarpiece of the ‘Oratorio di San Lorenzo, The Nativity with Saints Francis and Lawrence. Unfortunately, in 1969 the work of great Prestigous was stolen and never seen again, as to be still in the Top Ten Art Crimes FBI. After nearly half a century remained empty, December 12, 2015, the altarpiece of the Oratory of San Lorenzo, thanks to the association FACTUM ARTE that deals with faithful reproductions and restorations of masterpieces, is back to shine with the faithful copy of the Nativity with Saints Francis and Lawrence.

Between 1699 and 1709 the artist Giacomo Serpotta Palermo embellished with its stucco interior of the Oratory of San Lorenzo with an apparatus of statues of the lives of saints, pull over by allegorical statues and enriched with putti playing and laughing. Thanks to the realism and the elegance of the entire work of the Serpotta, the ‘Oratorio di San Lorenzo is considered his masterpiece.