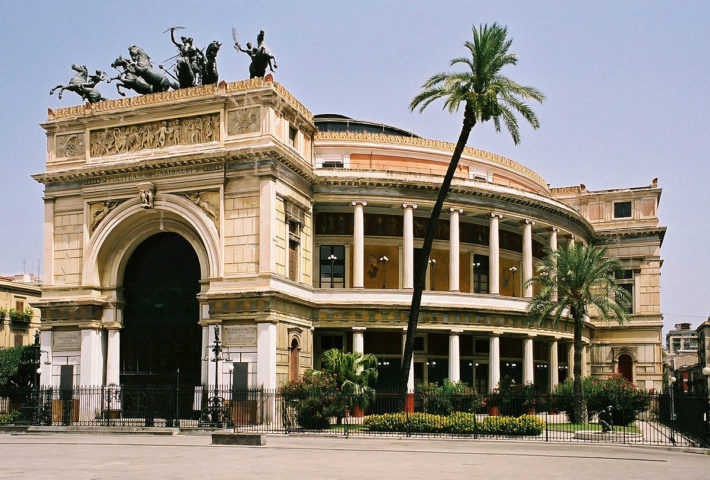 Politeama Theatre is one of the most important theaters of the Sicilian capital. With its name “Politeama” means a generic theater that is used to representations of various kinds, not only theatrical or lyric. It was born with a social function, as a theater for an audience more popular that allowed less wealthy citizens to enjoy themselves operettas, comic and dramatic works, comedies, balls and parties.

Completed in 1874 he was commissioned by the mayor of Starrabba Rudinì and designed, in winning a competition, the architect Giuseppe Damiani Almeyda. The latter for the construction of the theater Politeama Garibaldi (the name was added to the death of Giuseppe Garibaldi) was inspired by models of academic classicism of the 1800’s: the theater-circus nasonde but inside a room in a horseshoe. Its architecture refers to the theoretical project of the theater of Durand who had canonized the revival of the historic monument that is the Roman amphitheater.

Outside the Politeama Garibaldi consists of a triumphal arch that has the same equilibrium neoclassical typical Napoleonic triumphal arches. The triumphal arch is topped by a bronze quadriga by Mario Rutelli representing “The Triumph of Apollo and Euterpe” work flanked on both sides by a pair of knights Cavelli and bronze made by Benedict Civiletti representing the Olympic Games.

Since 2001, the theater is an official dell’Orcherstra Sicilian symphony that every year gives us a wonderful and rich concert season.