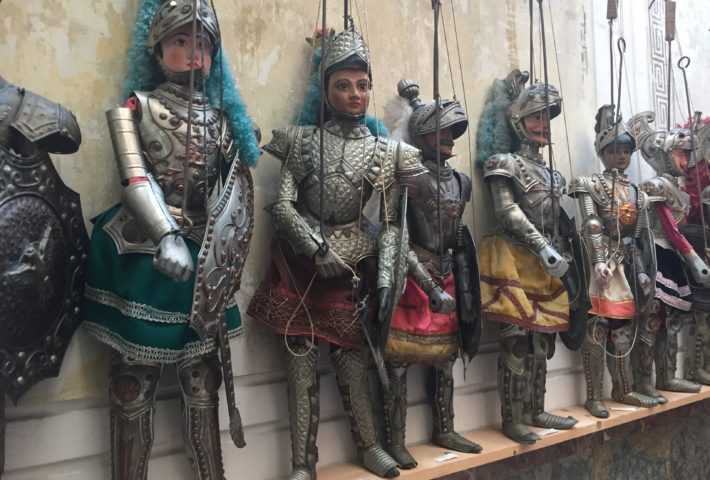 Pupi’s Opera is part of the puppet theater, it can be considered typical of the Sicilian tradition. The Opera of Pupi fact is especially states in southern Italy in the first half of 800.
Since 2008 it has been officially recognized by UNESCO as an oral and intangible heritage of humanity.
The golden era of the Opera dei Pupi goes from 1840 to 1890 when, ifference today that everything is done by puparp, around this tradition moved craftsmen, tailors, painters, sculptors and embossers.
The work of the Sicilian Pupi boasts two fundamental matrices which are based in one art:

– The oral tale with cuntastori

– The story of gestural dance with swords

The puppets, in fact, they are moved from the “puppeteer” through the wire, while the events are narrated.

The main sources and topics covered within the theater find their origin in cavallereshi issues such as Chanson de Geste, the Carolingian cycle that goes from the death of Pepin the short to that of Charlemagne, and even the Jerusalem Delivered, St. Genevieve and the stories of the Beati Paoli.
In the Opera dei Pupi the typical behaviors are also transmitted the Sicilian people, their sense of honor, the defense of the weak and of the just and their faith.

The appearance of the puppets as we know it is due to the frescoes inside the Norman Palace and the Palazzo Steri in Palermo, from which the first puppeteers have taken inspiration.

There are different traditions opera dei Pupi, the best known and famous are those of Palermo and the Catania.

Palermo’s Tradition
The skeleton of the baby is made of wood consists of nine parts tied together with wire, the size of the puppets of the Palermo tradition varies depending on their character the other riders are 65 cm; their weighs between 7 and 10 kg. The Pupo Palermitano has articulated knees and mobile right hand to be able to sheathe and unsheathe the sword after defeating his enemies. The puppets are then dressed in clothes and wear a full plate with carvings and decorations for distunguere the various characters.

Even in this the backbone is made of wood dressed in clothes and armor, though the baby Catania is highest, it measures 1.40 meters and weighs about 20 kg her knees are stiff. Precisely because of their considerable weight the movements of the puppets are more wide lenses and emphatic than those of Palermo and the sword is always drawn ready to attack.

In Palermo today the Opera dei Pupi is linked to Cuticchios families, Silver, Mancuso and Sanicola that have passed down from father to son that this art is part of our history and our tradition.