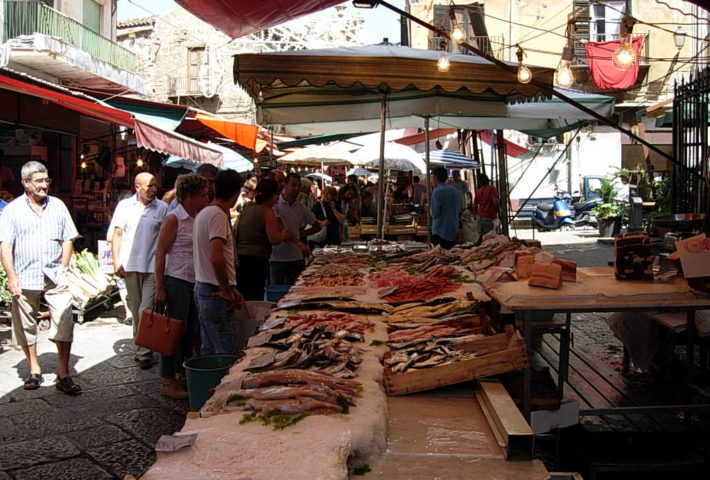 On your holiday in Palermo can not miss a visit Ai Markets historical Palermo dating from the period Arabic: “Ballaro”, “Vucciria” and “Capo”. They will come to internal Immersed in the old Palermo.
Markets historians mentioned above, are located in three of the four districts Citizens (historic districts in which Has Been divided Palermo in the seventeenth century) so that meet the Quattro Canti.

And ‘the heart of the district of the Albergheria, called in this way by “BAHLARA” a small village Near Monreale where they came from fruits and vegetables What the merchants were selling in the market.
As well as from Arab tradition in the streets of the historic market are crowded with wooden boxes containing the goods for sale What IS Continuously “abbaniata” retailers. The Ballaro Market And What’s largest and oldest of between All ed InOLTRE What better preserves the true identity of Palermo, in regard populated by different ethnic groups lived and What makes it unique.

VUCCIRIA STREET MARKET
The Vucciria market covers a square Caracciolo and surroundings, I was once chieso arches diversified, Today And quite OUTDOORS. In Vucciria you can find ALL ingredients typical of the cuisine of Palermo. Infattti addition to admiring the Sicilian delicacies you can anche Eating foods already ready What whet the sight smell and taste buds of passers-by and tourists.
The name “Vucciria” derives from the French “boucherie” which in Italian means butcher in The pace just dove rises Market Today there was a slaughterhouse, but today no more pressente YES Remember thanks to the presence of numerous butchers.
In 1974 the painter Renato Guttuso has transformed the Vucciria market in a framework That made famous historic Market worldwide. Today unfortunately As it represented by Guttuso In HIS work and is greatly reduced; and as a result the market has gained a whole new face. More today than during the day and the Vucciria populated During the evenings from Palermo A large amount of Young People Having contributed a challenge new life to the historic Market.

CAPO STREET MARKET
The market town of Cape , formed under the Muslims is located in the neighborhood called antiamente Seralcado , but today the market gave its name to the whole district . The main axis of the boss is away Carini that starts from the homonymous port built in 1440 but rebuilt in 1700. The heart of the historical market leader is right that continues with Via Porta Carini blessed Paolie crosses from one side of Via Sant ‘ Augustine and the other via Cappucinelle . Inside Cape stand out for their architecture and churches of extraordinary beauty as the Immaculate Conception church baroque style .

The charm of the three historic markets of Palermo is given by their Arab origin who passed their smells and colors cal interano , who mixed with the typical ” abbaniate ” Reseller ( singsong dialect that entice customers to buy the goods on display ) make the visit very impressive is unique .