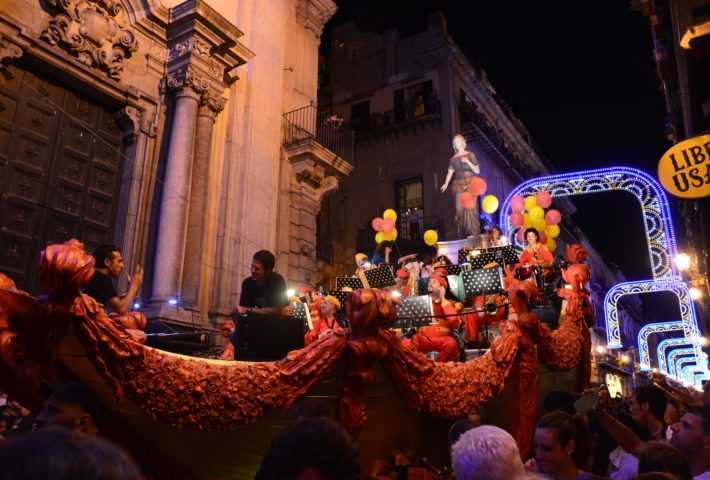 As every year from well 391 years, in July the Sicilian capital will pay tribute to its patron saint, the “Santuzza”, Rosalia. The feast of Santa Rosalia, “U fistinu” mix of folklore and religion, celebrates the liberation of Palermo from the plague of 1624, following the discovery of the relics of the Holy and became the patron saint, holy ousting Cristina, Santa Oliva, Santa Ninfa and St. Agatha .; an event that annually attracts tens of thousands of tourists.

Santa Rosalia or Rosalia Sinibaldi (1130-1156), according to tradition, belonged to the noble family of the Sinibaldi and was virgin Palermo twelfth century. He lived at the court of King Roger before retiring as a hermit in a cave on Mount Pellegrino, where he died. According to legend, Rosalia, appeared in a dream to a hunter pointing to where he could find his remains, which brought in procession in the city stopped the epidemic.
The first feast was ordered by Cardinal Giannettino Doria in 1625, since then in Palermo celebrates the “Santuzza”. The festivities last for five days July 10 to 15, but the two most important moments you have 14 and 15. In fact, the days before these dates are prepared and waiting to veritable feast.

On the evening of July 14 the people of Palermo, after attending a show, in the courtyard of the cathedral town, on the life of Santa accompany along the Cassaro, a cart (made every year by local artists) for Rosalia, whose last stop on the Foro Italico, where by tradition each year takes place the impressive fireworks display.

The Festival ends on July 15 with the solemn religious procession in the old city of the relics of the saint, after which, before returning at midnight in the cathedral, the cardinal is usually spare a thought to the Sicilian capital.

Even today, almost 400 years later the party is a tradition still very much alive and felt by all the people of Palermo and that strengthens the bond between the city and its inhabitants.